Fun facts about Half Dome:
Elevation: 2,695m
Elevation gain from Yosemite Valley: 1,600m
Our total hiking time: 6.5 hours up, 4.5 hours down (as a medium size group )
Roundtrip distance via the Mist Trail: 22.7km

Here is the location of Yosemite Valley with respect to Santa Cruz.

And here is our approximate route up Half Dome (photo from a previous trip). 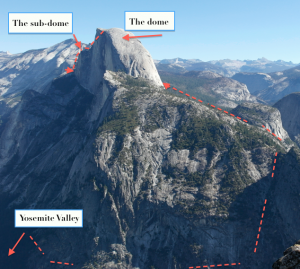 We went with some friends to hike Half Dome. The goal was to reach the top for sunset, so we left at 11:30 and hiked all night. Here is us starting out. 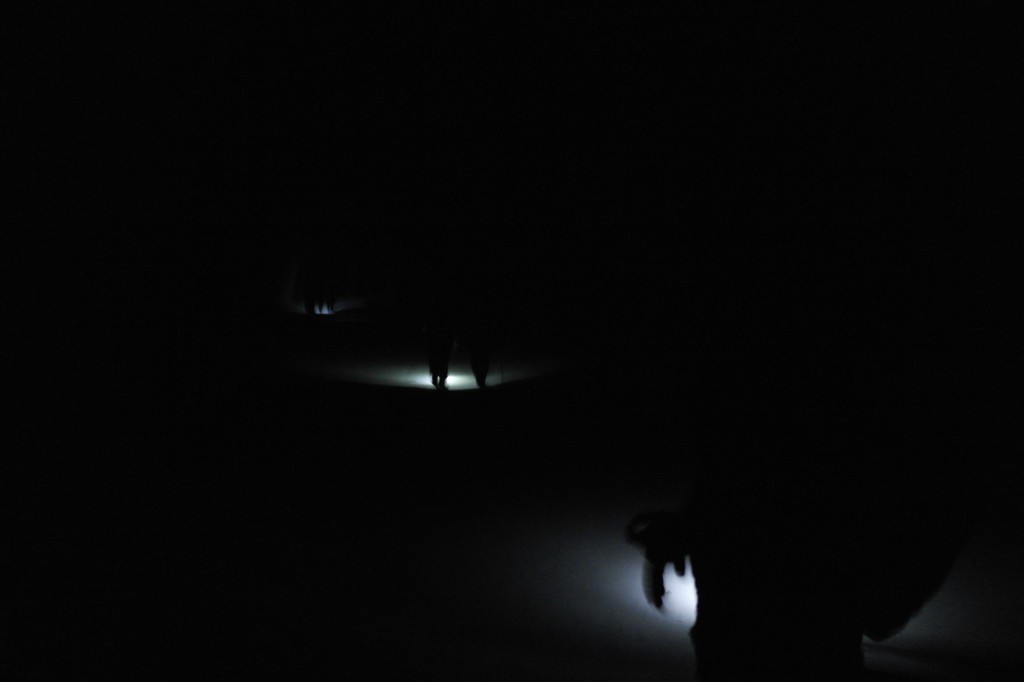 It was a clear, moon-less night. The stars were very bright. It was warm for a Yosemite night, but much cooler than it would have been during the day. My favourite part of the hike was when we got out of the forest and we could finally see the dome, and it was still night, so you could just see tiny lights from people’s headlamps going up the sub-dome or dome – either back and forth on the staircase on the sub-dome or up the cables. I was surprised at how many people were doing the night hike. We saw maybe 10-15 other people.

We were just reaching the sub-dome as dawn started. You can still see one remaining star (or some kind of celestial body … maybe its a planet since it is so bright). 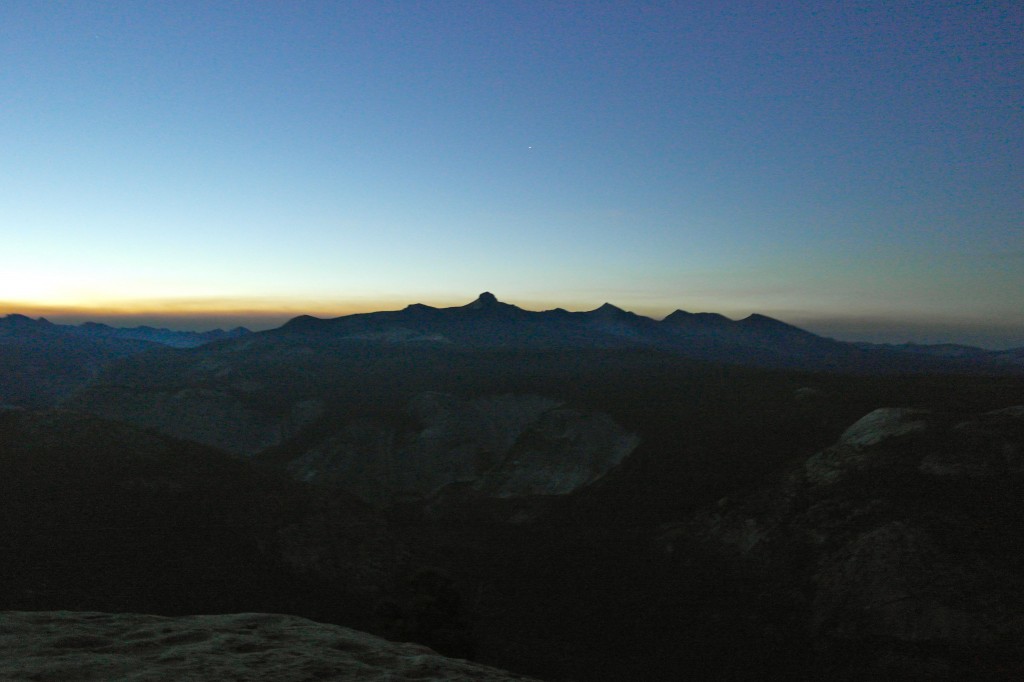 Here is Dmitriy heading up the cables on the dome. We got up at 6:10 am. 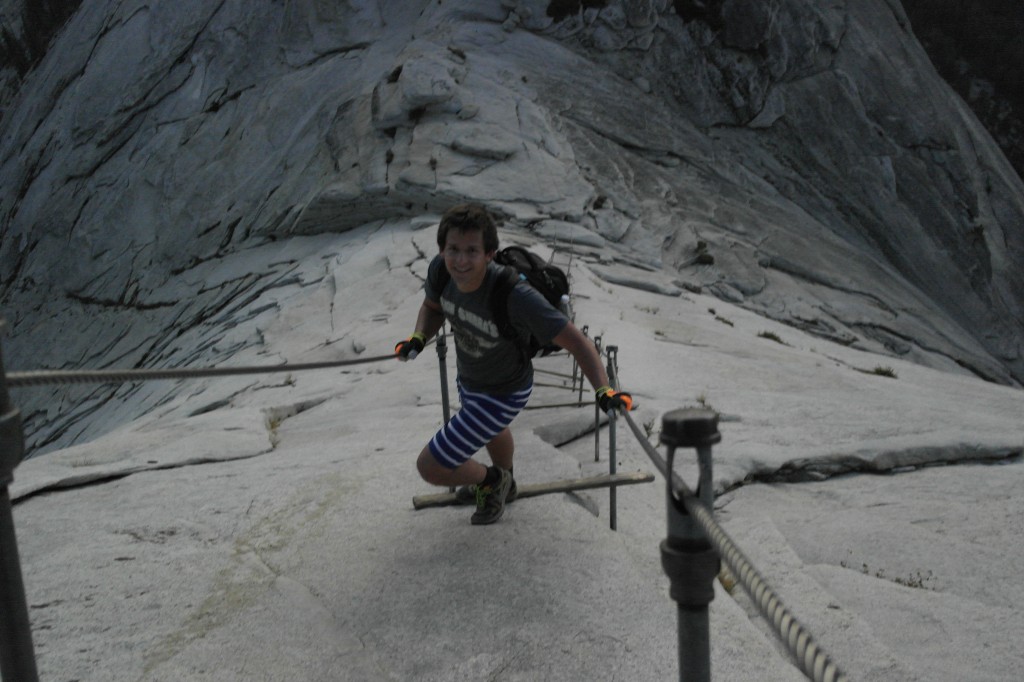 Dawn from the top of Half Dome: 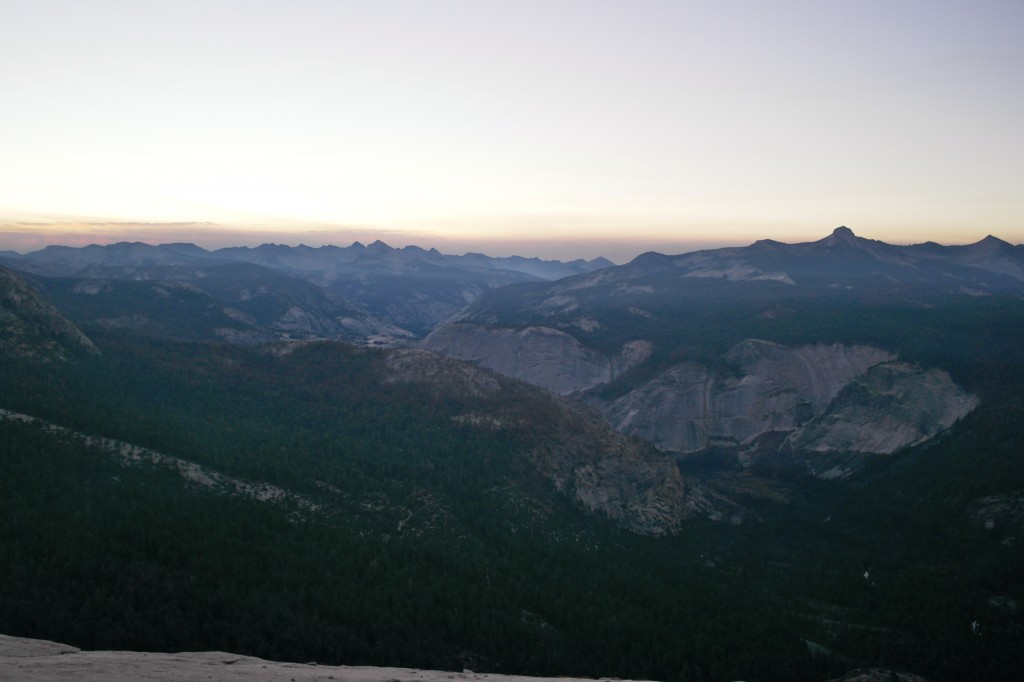 The other direction. The colours really looked like this, with the layers. We watched the sunrise from the top of Half Dome. 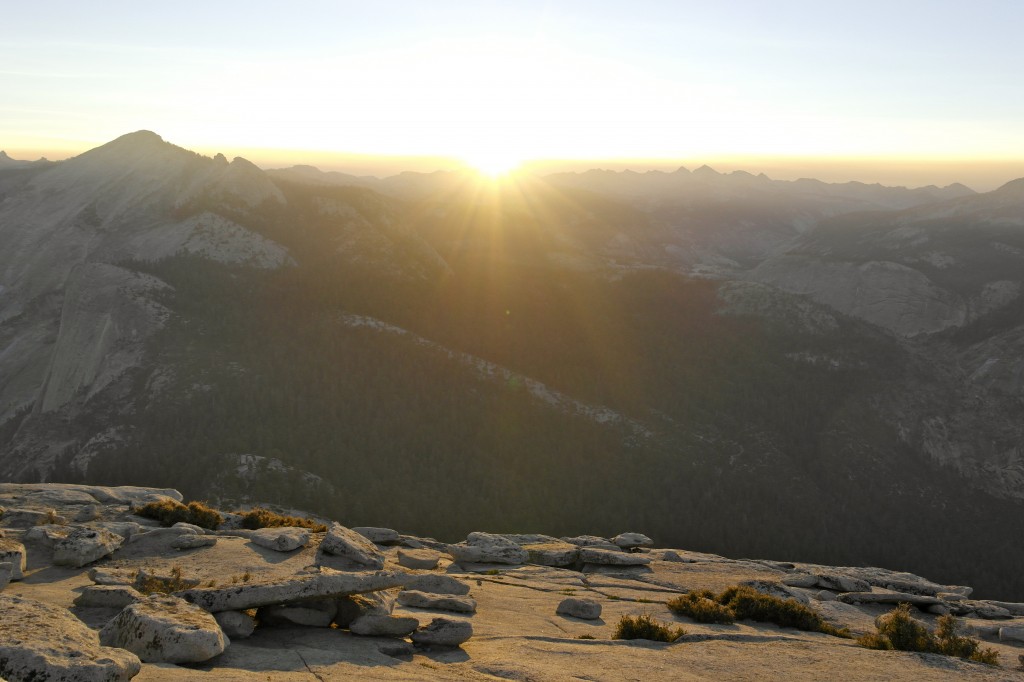 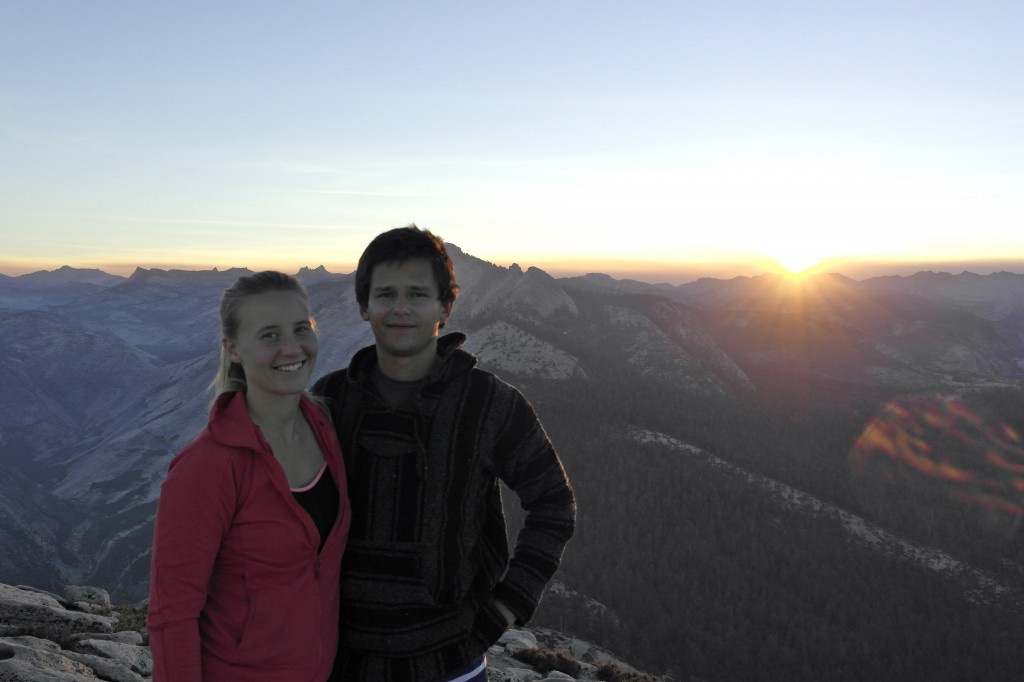 We hung out on the top of Half Dome for a while. I had a short nap and we ate some snacks. There was a controlled burn that started shortly after sunrise, so it started getting pretty smokey off in the distance. 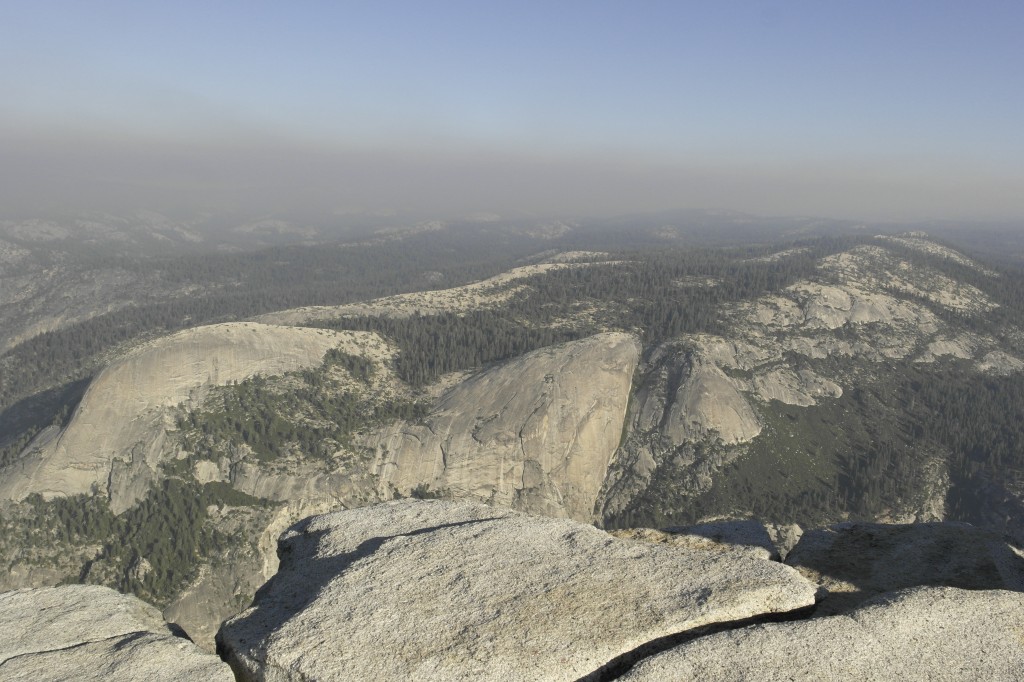 We headed back down the cables at 8am. This is a photo showing the steepness. The steepest point is at a 66 degrees incline. Here is a photo looking up at the dome on the descent. 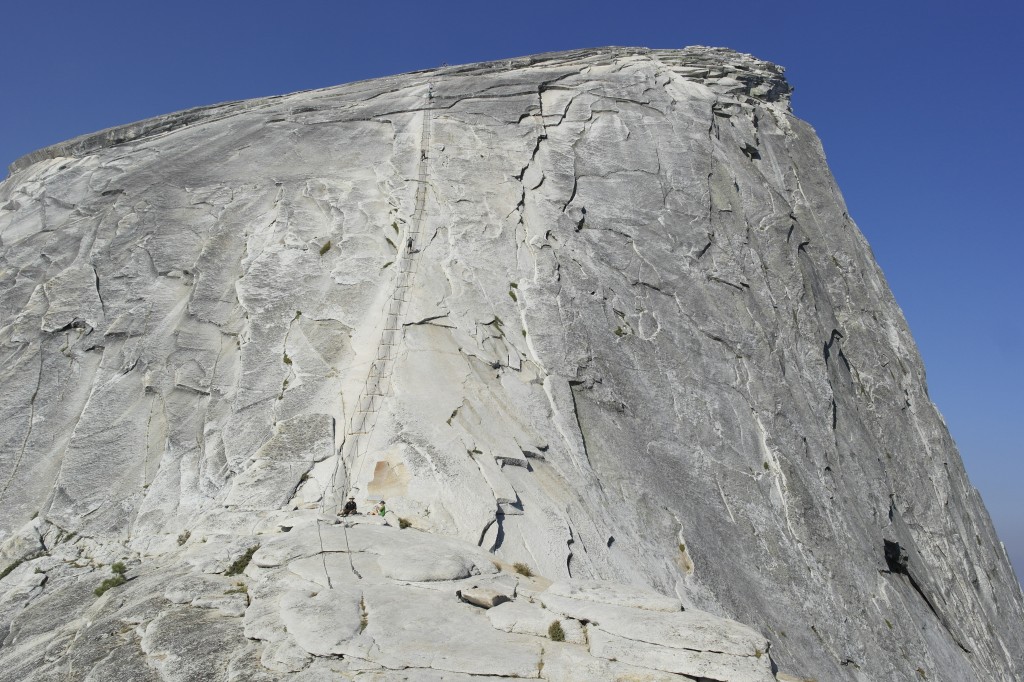 And a few photos from the way down. This is the only time I’ve ever found the descent harder than the ascent – not only was I exhausted, but it was also really, really hot. I saw a coyote!